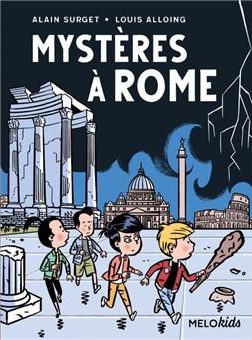 Romain, Amytis, Jasper and their classmates take part in an archaeological course in Rome, under the direction of a crazy professor. During their excavations, they discovered an Etruscan tomb which, according to the indications engraved on the sarcophagus, would be that of an evil god. But isn’t it dangerous to wake up a God capable of hurling thunderbolts on the city? And what happened to the professor whose body was found in the stone sarcophagus?

London, Scotland, Egypt, the Mayan country, Rome, on the Transsiberian railway or in Tokyo… The Mysteries series is a series of illustrated fiction, that will take you all around the world with a class of 10 and 11 year old and their teacher.